Circling the Sun is the #1 August 2015 Indie Next Pick by the American Booksellers Association.

“Famed aviator Beryl Markham is a novelist’s dream…McLain riffs on the facts, creating a wonderful portrait of a complex woman who lived—defiantly—on her own terms.” —People (book of the week)

“Behind every great man is a woman no one ever bothered to write a book about. Or enough of them, at least, that Paula McLain could easily pluck one from history’s footnotes, as she did with her phenomenally popular 2011 novel, The Paris Wife. By telling the tale of Ernest Hemingway’s messy, passionate first marriage from his previously unsung spouse’s point of view, McLain created a fresh sort of fiction-biography hybrid. In Circling the Sun, she pulls another overlooked name from the dusty stacks of the 20th century, though this one stands very much on her own: Beryl Markham, a pioneering aviator and adventurer…McLain makes the novel’s time and place come alive in long, lyrical passages, and she takes care to humanize her muse, tracing how much her mother’s abandonment damaged her and drove her ambitions. Like its high-flying subject, Sun is audacious and glamorous and hard not to be drawn in by. Beryl Markham may have married more than once, but she was nobody’s wife.” —Entertainment Weekly

“Ballsy and way ahead of her time, British-born Beryl Markham was a pioneering female pilot living in 1920s Kenya—and a natural subject for the latest novel from The Paris Wife author Paula McLain (an expert in ahead-of-their-time-ladies).” —Cosmopolitan

“McLain’s eloquent evocation of Beryl’s daring life reminds us that independent women have always been among us, moving at their own speed.” — O, The Oprah Magazine

“Amelia Earhart gets all the airtime, but this pilot had the juicier past. Beryl Markham was a pioneering aviator—the first woman to journey from Europe to America solo—yet few young girls know her name. With her latest novel, based on true events, McLain author of the best-selling The Paris Wife, aims to change that. Beryl is one badass heroine. McLain crafts a story readers won’t soon forget.” —Good Housekeeping

“Paula McLain is considered the new star of historical fiction, and for good reason. Fans of The Paris Wife will be captivated by Circling the Sun…[the] book is both beautifully written and utterly engrossing.” —Ann Patchett, Country Living

“No one does compulsively readable historical fiction about women better than McLain. She proves it again in her new novel, one of her best, transporting us to 1920s Kenya.” —AARP

“Set in 1920s Kenya, this fictionalized history…is as luminous as its headstrong heroine. An exhilarating ride.” —Family Circle

“Enchanting…A worthy heir to [Isak] Dinesen, McLain will keep you from eating, sleeping, or checking your e-mail — though you might put these pages down just long enough to order airplane tickets to Nairobi…What’s certain is that the reluctantly earthbound armchair reader will cherish this gift for the hidden adventurer in all of us. Like Africa as it’s so gorgeously depicted here, this novel will never let you go.” —Boston Globe

“As chronicled in Paula McLain’s richly textured new novel, Circling the Sun, Beryl Markham’s life is the stuff of legend…McLain has created a voice that is lush and intricate to evoke a character who is enviably brave and independent.” —NPR.org

“The author of “The Paris Wife” takes her talents to Africa. This is the true story of the first woman to fly from east to west across the Atlantic – like a boss. Add a love triangle that includes Meryl Streep’s character from “Out of Africa,” and meet your smart beach read.” —The Skimm

“Circling the Sun chronicles Beryl’s divorce, remarriage, racetrack triumphs, family tragedies, early flying lessons and affairs with an ease that can almost make you forget it’s historical fiction. McLain succeeds in bringing the past to life, and by the last pages, readers will hate to say goodbye to such an irresistible narrator.” —Miami Herald

“Paula McLain brings Beryl to glorious life, portraying a woman with a great many flaws that seem to result from her zest for life and inability to follow the roles expected of women in the 1920s and ’30s.” —St Louis Post Dispatch

“If Beryl Markham hadn’t existed, a novelist would have had to invent her…Beryl is free-spirited and headstrong; in McLain’s hands she is a prototypical independent woman, forging her own way in a man’s world…Markham’s voice, expertly channeled, and McLain’s fluent prose keep the novel on course…”Circling the Sun” soars.” —Newsday

“The Paris Wife is good, but Circling the Sun is much better. Hadley Hemingway was sweet but dull. [Beryl] Markham was neither. She was too much for her times, but in Circling the Sun, Markham finally gets the treatment she deserves. That it also makes for bold, absorbing fiction is so much the better. No complaints here.” —New York Daily News

“Paula McLain is yet another 21st century woman who can write rings around the hyper-masculine men who dominate so much of American fiction.” —Liz Smith, NY Social Diary

“If you’re one of the many (many!) who read and loved Paula McLain’s The Paris Wife, then you’ve been waiting for this new work for a while now. The historical fiction-writer takes on the feminist aviator Beryl Markham’s story, traveling to Kenya and taking to the skies — and the results are beautiful. If you can’t make it to Africa this summer, Circling the Sun is your next best bet.”—Bustle

“McLain’s skill at blending fact and fiction, which dazzled readers in The Paris Wife, is on full display in Circling the Sun. Drawing on Markham’s memoir West with the Night and other historical sources, McLain paints a lushly colored portrait of 1920s Kenya…In prose as luminous as the African skies, McLain charts Beryl’s journey of self-discovery: searching, stumbling, getting back up and eventually soaring. Heartbreaking and defiantly hopeful–like Beryl herself–Circling the Sun is a masterful story of hardship, courage and love.” —Shelf Awareness

“McLain’s latest showcases her immersive command of setting and character…[she] paints an intoxicatingly vivid portrait of colonial Kenya and its privileged inhabitants. Markham’s true life was incredibly adventurous, and it’s easy for readers to identify with this woman who refused to be pigeonholed by her gender. Readers will enjoy taking in the rich world McLain has created.” —Publishers Weekly (starred review)

“A full-throttle dive into the psyche and romantic attachments of Beryl Markham—whose 1936 solo flight across the Atlantic in a two-seater prop plane transfixed the world…Popularly regarded as “a kind of Circe” (to quote Isak Dinesen biographer Judith Thurman), the young woman McLain explores owns her mistakes (at least privately) and is more boxed in by class, gender assumptions, and self-doubt than her reputation as aviatrix, big game hunter, and femme fatale suggests. Ernest Hemingway, who met Markham on safari two years before her Atlantic crossing…proclaimed her 1942 memoir West with the Night ‘bloody wonderful.’ Readers might even say the same of McLain’s sparkling prose and sympathetic reimagining.” —Kirkus (starred review)

“Famed aviator and renowned racehorse trainer Beryl Markham is only one of the subjects of McLain’s captivating new novel. The other is Kenya, the country that formed the complicated, independent woman whom Markham would become. Drawing on Markham’s own memoir, West with the Night, McLain vividly introduces this enigmatic woman to a new generation of readers…McLain’s The Paris Wife was a book group darling. Expect nothing less for this intriguing window into the soul of a woman who refused to be tethered.” —Library Journal (starred review)

“Bravo to [McLain] for fictionalizing the grandly adventurous, passionate, and scandalous life of British East African Beryl Markham, the first licensed woman horse trainer and breeder on the continent and an intrepid, record-setting pilot…McLain sustains a momentum as swift and heart-pounding as one of Beryl’s prize horses at a gallop as she focuses on the romance, glamour, and drama of Beryl’s blazing life, creating a seductive work of popular historical fiction with sure-fire bio-pic potential.” —Booklist (starred review)

“Paula McLain has such a gift for bringing characters to life. I loved discovering the singular Beryl Markham, with all her strengths and passions and complexities, a woman who persistently broke the rules, despite the personal cost. She’s a rebel in her own time, and a heroine for ours.” —Jojo Moyes

“McLain cements herself as the writer of historical fictional memoir with Circling the Sun, giving vivid voice to Beryl Markham. In a brilliant move, McLain hardly focuses at all on the transatlantic flight that made the aviator so famous, choosing instead to explore what happened before: Markham’s unorthodox childhood in Kenya, a failed marriage, and a star-crossed love affair with Denys Finch Hatton. In McLain’s confident hands, Markham crackles to life, and we readers truly understand what made a woman so far ahead of her time believe she had the power to soar.” —Jodi Picoult 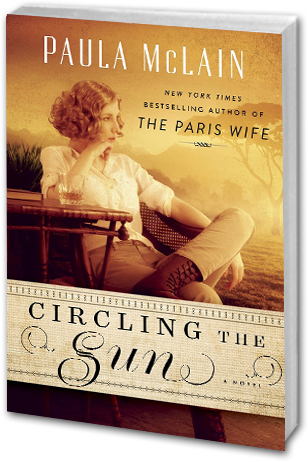