At the start of this stunning crime novel from McLain (The Paris Wife), Anna Hart, a San Francisco detective who’s on indefinite leave following a tragic incident that has brought her marriage to the brink and destroyed her faith in herself, is driving to Mendocino, Calif., where she spent part of her childhood with the foster parents who offered her a first taste of stability. Soon after she arrives in town, she spots a missing person poster: 15-year-old Cameron Curtis, adopted daughter of a recently retired actor, has vanished. Cameron’s fate reminds Anna of the still-unsolved murder of a childhood friend that occurred when she was in high school. “Someone has to save this girl,” she resolves. “And it has to be me.” Then other similar crimes start coming to light, and Anna becomes eerily aware of the disturbing connection between the victims and their predators. McLain matches poetic prose with deep characterizations as she shines a light on the kindness in her characters’ souls. Fans of literary suspense won’t be able to put this one down.” — Publishers Weekly Starred Review

“Paula McLain has written a powerhouse of a novel that is guaranteed to keep the reader up all night. When the Stars Go Dark is a beautifully written, sharply observed literary thriller with an extraordinary, unforgettable heroine and a twisty plot with a surprise ending. An unconventional, unflinching look at the long shadow cast by trauma and the resilience it takes to survive. This is a novel of both great sadness and great beauty, a gripping story drenched in the exquisite allure of the natural world.” —Kristin Hannah, New York Times bestselling author of The Great Alone and The Nightingale

“When the Stars Go Dark is a fantastically propulsive and deeply atmospheric novel that grabs you from the very first page. Visceral and hauntingly suspenseful, Paula McLain has proven to be a masterful storyteller no matter the genre.” —Aimee Malloy, New York Times bestselling author of The Perfect Mother

“With this breathtaking novel, Paula McLain proves she can do anything. Exquisitely written, immersive, and atmospheric, When the Stars Go Dark is a tour de force of literary suspense. It pulled me under and left me gasping.” —Christina Baker Kline, New York Times bestselling author of The Exiles and Orphan Train 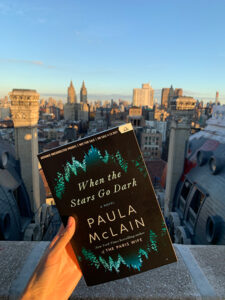