In Ernest Hemingway’s introduction to his memoir, A Moveable Feast, he writes, “If the reader prefers, this book may be regarded as fiction. But there is always the chance that such a book of fiction may throw some light on what has been written as fact.” I’m hoping my novel will work to illuminate not just the facts of Ernest and Hadley’s years in Paris, but the essence of that time and of their profound connection by weaving both the fully imagined and undeniably real.

When I began to research my book, beginning with biographies of Hemingway and Hadley, and with their delicious correspondence, I knew the actual story of the Hemingway’s marriage was near perfect; it was a ready-made novel, ripe for the picking. I didn’t have to invent a plot for them, nor did I want to. My work would be to use the framework of historical documentation to push into these characters’ hearts and minds, discovering their motivations, their deepest wishes.

The most important step for me was getting Hadley’s voice. She has very little dialogue in A Moveable Feast, but what’s there is so evocative. It led me to seek out the letters she wrote to Ernest during their courtship, and that’s when I knew I could write the book. Her speech rhythms, her intelligence and charm and sense of humor all come through with clarity and effervescence. I simply fell in love with her, with them both.

Beginning to truly hear a character’s voice is like finding a piece of magic string. It pulls you inside their consciousness, and helps you see the world through their very particular point of view, unfolding the story only they can tell. That’s ultimately why I chose to write a few select passages from Ernest’s perspective. There were things I simply needed to know about the choices he was making, and could only know those things from the inside out. He’s terribly complex. Parts of their story aren’t easy to understand—and yet I needed to understand them if I was going to fully inhabit the world that needed inventing: the interior one. In many of Hemingway’s biographies, Hadley is quickly dispatched as “the first wife,” a youthful experiment gone awry. Their emotional crisis—that terrible spring and summer when Hadley learns she’s been betrayed—occupies only a few taut pages in one well-regarded biography, but is the crux of my story. I invented what I couldn’t know—all of their dialogue, for instance—but knew, in a deeper way, one that can’t be aided by all the biographies in the world, what lay at the heart of what I was imagining.

Paris in the 20’s was such a singular time in history, and the Hemingways’ years there were so full of spectacular adventure and compelling encounters, that I felt entirely grateful to live it with them. Working on this book was hands down the most fun I’ve ever had as a writer. I’ll never forget it.

In 1898, Ernest’s father, a physician, had to step in and deliver his own first child, Marcelline, when the doctor on hand for the home birth suffered a heart attack in the middle of the delivery. Dr. Hemingway rushed home in a snowstorm to administer first aid to the doctor, attend to his wife’s anesthetic, and perform a very difficult high-forceps delivery. Apparently Grace wasn’t inordinately traumatized by the ordeal. Ernest was born eighteen months later.

Hemingway was born nearly blind in his left eye. This defect kept him from enlisting in the army; he volunteered for the Red Cross as an ambulance driver instead.

Ernest was notoriously accident-prone. In his lifetime, he suffered no fewer than ten concussions for various reasons—trench mortar, auto accidents, plane crashes, jumping from a motorcycle into a ditch. Some of his mishaps had comic elements, like pulling a skylight down on his head, or dropkicking a mirror, or shooting himself in the legs while gaffing a shark, or being clawed while playing with a lion. Some were quite terrible. Following two successive plane crashes in Africa in 1954, he was even presumed dead. In his biography of Hemingway, Jeffrey Meyer lists the various injuries sustained: “His skull was fractured, two discs of his spine were cracked, his right arm and shoulder were dislocated, his liver, right kidney and spleen were ruptured, his sphincter muscle was paralyzed by compressed vertebrae on the iliac nerve, his arms, face and head were burned by the flames of the plane, his vision and hearing were impaired…” Days later, Hemingway was amused to read his obituary in a café in Venice. Nevertheless, the injuries continued to plague him and probably shortened his life considerably. Jack told Denis Brian, one of Hemingway’s biographers, that his father was never the same person afterwards.

Sara and Gerald Murphy were the real-life models for the tragic Dick and Nicole Diver in Fitzgerald’s Tender is the Night. Nicole Diver wears a long string of pearls down her back with a bathing suit on the beach at Antibes. So did Sara Murphy.

Three of Hemingway’s four wives were from St. Louis. Hadley and Martha Gelhorn both attended Mary Institute. Also, Martha Gelhorn’s father was Hadley’s family gynecologist. Hadley went to see him not long after she and Ernest began courting, because she wanted to be reassured she could have children.

Hadley was the only one of Ernest’s wives who wasn’t a journalist.

Not long before Mary Welsh became Hemingway’s fourth wife, she worked for the Chicago Daily News, where Paul Mowrer, Hadley’s second husband was then the managing editor. In Mary’s memoir, How it Was, she remembers several cocktail parties at the Mowrer’s apartment, though it never came up that Hadley was the first Mrs. Hemingway.

When Hadley and her second husband, Paul Mowrer were living in Paris in 1948, they met and befriended Julia Child,whose husband Paul Child had first become acquainted with Hadley and Ernest in the 20’s, in Paris.

In 1944, Jack Hemingway (Bumby) served the OSS in World War II. While on reconnaissance he was wounded and apprehended by Nazi German troops. The officer in charge of his interrogation was an Austrian who, when he heard Jack’s full name, asked him if he’d ever visited Schruns. As it so happens, the officer’s girlfriend was no other than Bumby’s nanny Tiddy! The officer ended the interrogation and sent him to a hospital for treatment. From there, Jack became a prisoner of war while his parents worried for him profusely. He was released unharmed six months later. 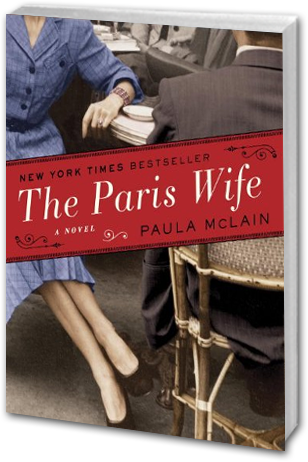